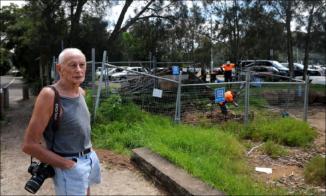 A Church Point resident has complained of asbestos dust after a 100-year-old boatshed was torn down opposite his home this morning.

Warning letters from Pittwater Council about the impending demolition of Bennett’s Boatshed and removal of the dangerous mineral were sent to neighbouring properties at the eastern end of Church Point Reserve about a week ago.

Asbestos warning signs were also erected around the site this morning.

But Collyn Rivers, who lives directly across from the site, said he was shocked to witness the council-contracted workers destroy the building with hammers without any apparent action taken to contain asbestos dust, apart from wrapping up some of the building material in plastic before putting it in on a truck.

He said much of the building material was left in a “huge pile” for hours.

“To my horror, they just smashed (the shed) apart and I didn’t see them take any precautions,” he said.

“I would have expected some occupational work and safety measures.

“They just wrapped some in plastic before putting it in the back of a truck.”

Asbestos can be hazardous when microscopic fibres become airborne and are inhaled.

Mr Rivers worried that people who waited at a nearby bus stop, walked past the site on the foreshore walk or were at the carpark could have been affected.

A Pittwater Council spokeswoman said the licensed building contractor hired by the council removed the asbestos according to Environmental Protection Agency rules.

“These guidelines stipulate that neighbouring property owners be notified seven days in advance; the asbestos is removed and wrapped; and that it is taken to a waste facility licensed to accept asbestos,” she said. “All these actions have been carried out by the contractor.”

As reported by the Manly Daily last October, the shed was listed for demolition after a council report said it posed “numerous hazards and presents as a potential nuisance to third parties”.

The decision upset the non-profit jewellery and metalworking organisation Silver Plus, which successfully applied for a $40,000 state government grant to have the boatshed rebuilt as a workshop.

ASBESTOS FACTS-Asbestos is a generic term for several fibrous silicate minerals.
-Products made from asbestos bonded material include fibro sheeting, roofing shingles and guttering and drainage and flue pipes, but only fibro products made before 1987 contain asbestos.
-The manufacture and use of asbestos products was banned nationally from December 2003.
-Breathing in asbestos fibres can cause asbestosis, lung cancer and mesothelioma.
-The symptoms of these diseases do not usually appear until about 20 to 30 years after the first exposure to asbestos.

Is the site a health concern?