Ignorance, negligence and cover-ups led to the deaths of tens of thousands of Australians from asbestos-related diseases. When the building material was finally banned in Australia in 2003, too many people assumed it was a receding nightmare – that the real threat had died with one of its victims, the tireless campaigner Bernie Banton. They could not have been more wrong. Natalie O’Brien reports, Sydney Morning Herald.


TONNES of asbestos-contaminated materials are being illegally dumped across the state, exposing current and future generations to the deadly fibres.

An investigation by The Sun-Herald has established that 80 clean-up notices – a third of all the notices issued by the NSW Environmental Protection Authority in the past five years – have been for illegal or improper asbestos disposal. 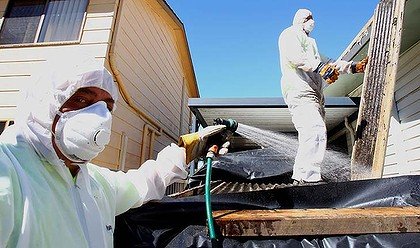 Fighting the good fight … John Limpus and his team remove asbestos from a house in Lake Haven. Photo: Anthony Johnson

A group of professional waste transporters became so fed up with rogues in their industry that they organised undercover surveillance – shown above – to follow trucks working for a company they suspected of illegal dumping. Their investigator followed and filmed one truck until it illegally dumped waste at Maroota, north-west of Sydney.

Their surveillance was handed to the Western Sydney Regional Illegal Dumping Squad – better known as the RID Squad – and resulted in the offenders being caught, fined and forced to clean it up. But many offenders are never caught.

When broken down, asbestos dust fibres can be carried in the air and, if breathed in, can cause the deadly lung disease mesothelioma, asbestosis or lung cancer. 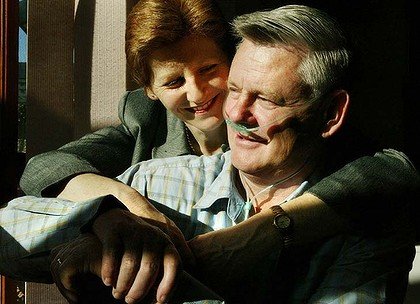 Tireless campaigners … the late Bernie Banton with his wife, Karen, at their Sydney home in 2004. Photo: Kate Geraghty

“There are people who are not even born yet that will come down with asbestos-related diseases because of this,” warns Barry Robson, president of the Asbestos Diseases Foundation of Australia. “It should have stopped by now.”

But it hasn’t, and Mr Robson calls it a “time bomb”.

In the past year asbestos has been found in:

In an operation late last year, the RID Squad’s investigators and EPA officers covertly tracked vehicles dumping waste illegally in eight locations across Sydney’s west. Asbestos was found at three of the sites.

The state government does not keep central records that can analyse or track asbestos dumping offences. The Sun-Herald manually trawled through the EPA’s clean-up notices to determine how many related to asbestos and found the number of dumpings on the increase, at least on private properties.

There have been 35 notices issued since January last year. But there are no systems in place to tally dumpings on public land. However, the RID Squad, formed in 1999 by the state government and seven councils to fight illegal dumping, estimates it has investigated about 150 cases involving asbestos in the past year.

“For the government not to have at hand the extent of illegal dumping is reckless,” says the Greens environment spokeswoman Cate Faehrmann.

In the past five years the EPA has launched 11 prosecutions against seven defendants with $230,900 in fines issued and 450 hours of community service ordered. There are 16 charges of illegal dumping of asbestos currently before the Land and Environment Court.

Criminal proceedings have also begun against a consultancy, Aargus Pty Ltd, which allegedly provided false reports claiming a property was asbestos-free. It is yet to enter a plea.

Tony Khoury, from the Waste Contractors & Recyclers Association of NSW, said the single biggest factor behind the illegal dumping of asbestos – whether it is a home renovator or a rogue operator – is the high price of disposal. Tipping fees alone are between $200 and $400 a tonne, but removing an average asbestos roof can cost about $45 a square metre – amounting to as much as $5000. The state government needed to subsidise the cost so “price is not a disincentive to public safety”, Mr Khoury said.

The Cancer Council’s spokesman, Terry Slevin, also called for incentives for people to do the right thing.

The effects of asbestos have long haunted NSW, the first place in Australia to begin mining asbestos. In 2010 the NSW Ombudsman, Bruce Barbour, issued a report, “Responding to the asbestos problem; the need for significant reform in NSW”. He said the “amount of asbestos remaining in NSW is immense”.

The Asbestos Diseases Research Institute, in its 2010/11 annual report, said 700 Australians were diagnosed that year with mesothelioma and 1500 with lung cancer caused by asbestos. It predicts the number will continue to rise, as the disease can take decades to develop. Mr Barbour estimated about 200,000 tonnes of asbestos-contaminated waste is being properly sent to landfill each year. But waste industry sources estimate that at least twice that amount is being illegally dumped.

Last year a company owned by the Dial a Dump entrepreneur Ian Malouf’s wife, Larissa, was ordered to clean up a stockpile of 170,000 cubic metres of asbestos-contaminated waste at its Alexandria property.

Two government inquiries, one state and one federal, are under way into asbestos management. The NSW inquiry is examining the impact of tipping fees on illegal dumping and ways to encourage proper disposal. All waste, including asbestos, is subjected to a $82-a-tonne recycling levy. Asbestos then attracts additional fees.

The Minister for the Environment, Robyn Parker, said the anecdotal evidence was that “illegal dumpers are motivated by the desire to avoid all waste costs, not just the levy”.

The NSW government has also set up the Heads of Asbestos Co-ordination Authority.

Its chairman, Peter Dunphy, said: “We are developing a model policy to show councils what they should be doing. One of the problems has been that the issue is just pushed between agencies.”

Asbestos fibres are small and light. The dust can stay in the air for a long time. People become affected by the dust when they inhale it.

Those most at risk are people whose work has brought them into contact with asbestos fibres and people who have lived or worked near asbestos-related operations.

The main illnesses associated with asbestos exposure are asbestosis, mesothelioma and lung cancer.

It can take from 15 to 60 years after the first exposure for fatal diseases to develop.