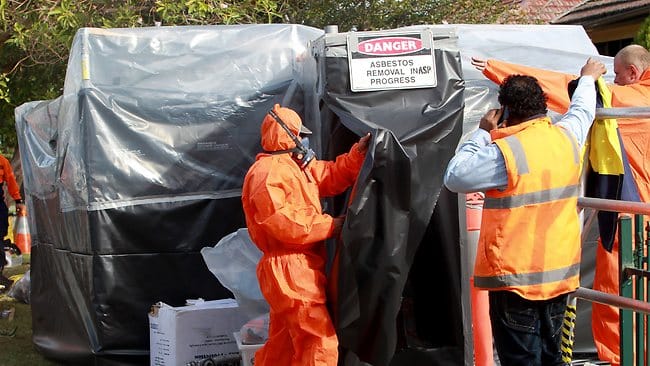 TELSTRA has admitted that there were “gaps” in the way its contractors were trained to handle the removal of deadly asbestos fibres from the infrastructure used in the rollout of the National Broadband Network.

Releasing the findings of an emergency audit into how the telco’s contractors mishandled the removal of asbestos from its pits and pipes, Telstra has confirmed that some of its contractors were not properly trained and that new stringent guidelines were now being put in place.

“While contractors participated in basic asbestos awareness and competency training, there were gaps in contractor training records for their subcontractor staff,” Telstra admitted in its audit of asbestos handling procedures.

The telco giant said it would ensure all contractor and subcontractor staff complete mandatory training in asbestos management, warning its partners that they would be fired unless they adopted new, stringent procedures for the removal of dangerous asbestos fibres.

“Contractors have been advised that the relevant improvements are mandatory before any return to work. Telstra expects its contractors to comply with their agreements otherwise they will not remain key suppliers to Telstra,” the telco said.

“The preliminary review and other information we have gained, has shown there are important areas for improvement among contractors. Prior to allowing recommencement of works, we are requiring our contractors make changes to ensure they comply with their contractual commitments,” said Telstra’s chief operations officer, Brendon Riley.

Telstra said it was working closely with Comcare and other stakeholders to strengthen mandatory training and field inspection for contractors and subcontractors.

“We will continue to be open about the status of these issues and the work we are doing to strengthen contractor management of asbestos handling. We will not allow recommencement of cement pit remediation work until we are satisfied the necessary safety measures are in place,” Mr Riley said.

The release of the audit findings come some three weeks after revelations of shoddy work by contractors carrying out work in preparation for the NBN forced Telstra to suspend work on its pits and also drew comparisons with Labor’s home insulation scheme, during which four contractors died.

After a crisis meeting in Canberra more than a fortnight ago, Telstra chief executive David Thodey said: “We own the infrastructure. It is our responsibility.”

Under an $11 billion deal between Telstra, NBN Co and the government, Telstra’s pits and ducts are used to lay optical fibres.

But a series of asbestos scares in areas including Penrith in western Sydney, Ballarat in Victoria, Mandurah in Perth and in Tasmania have prompted government intervention, raising new warnings that Telstra could face higher costs to remediate its pits and ducts.